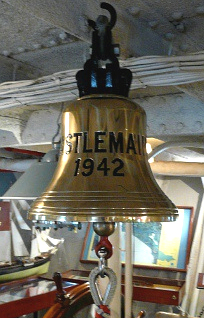 Scattered throughout HMAS Castlemaine are a wide range of ship's bells, including the original fittings. Others come from various naval and merchant vessels of historical interest. Bells were an integral part of shipboard life, being rung every half hour to keep time and thus regulating every duty performed upon the ship. Bells are one of the few distinctive and portable features of a ship and have become symbolic of the sailor's way of life.

A central chronometer (clock) was usually housed in the chart room or skipper's cabin, and it was from here that timings were taken and passed on via a system of bell striking, devised to indicate the time to seafarers. The original bell is hung at the rear of the bridge.

For normal handling of ships, the crew was divided into three parts so that each part worked for four hours and then stood down for eight hours or carried out other duties as allocated. This gave a system whereby there was a watch on deck to work the ship through twenty-four hours a day. To prevent one group of people constantly working in the middle of the night, the late afternoon was split into two watches of two hours each. These watches were known as the First and Last Dog watches.