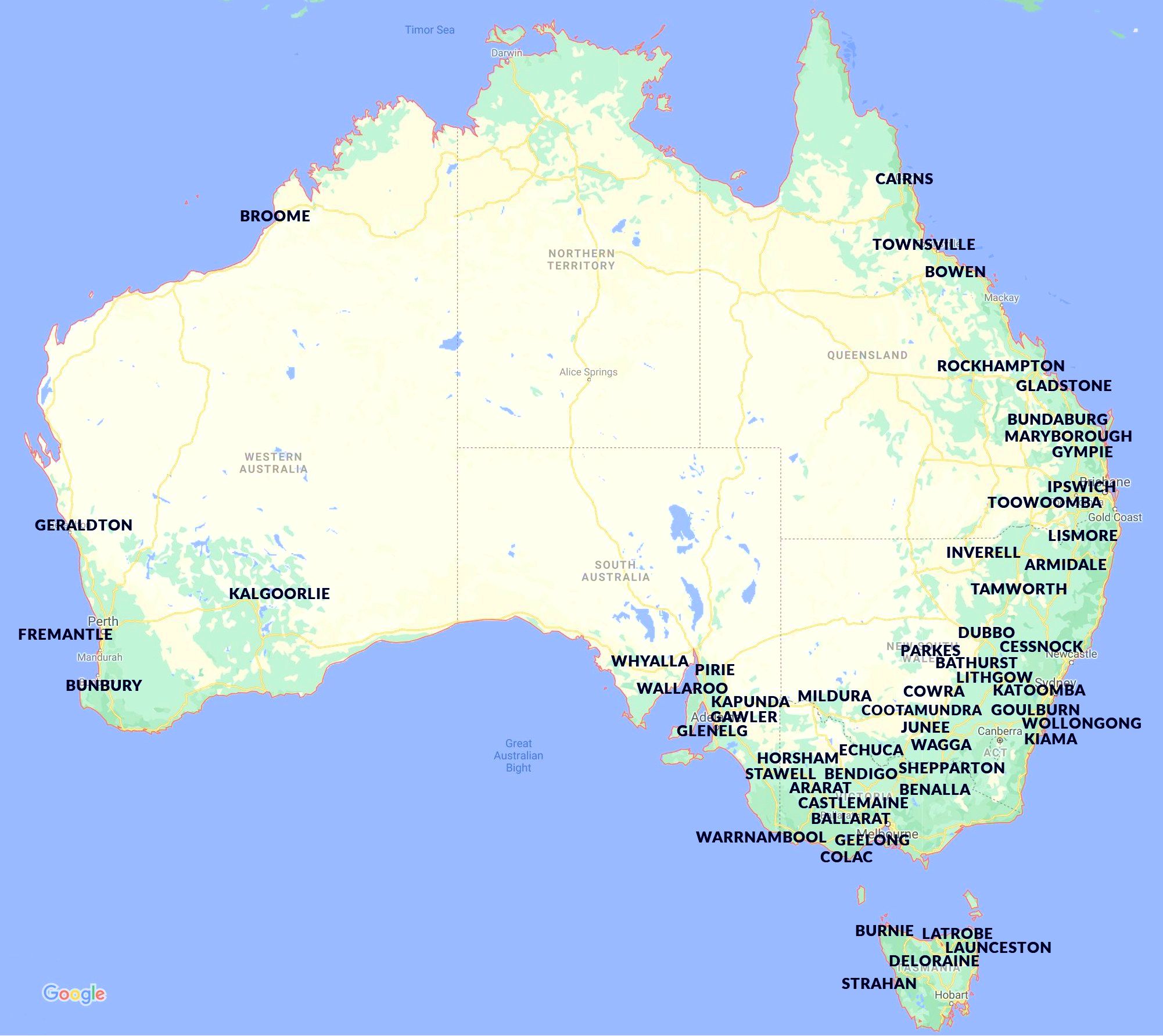 When war broke out in September 1939, the British Admiralty authorised the building of ten vessels in Australian shipyards. They were called corvettes, originally a French word for a class of small and handy warship.

The first, Bathurst, was laid down on 10 February 1940 at Cockatoo Island Dockyard, NSW, and gave her name to her sister ships, Bathurst-Class Australian Minesweepers. In all, sixty corvettes were built: 36 for the Royal Australian Navy, 20 for the Royal Navy (commissioned as HMAS vessels with Australian crews), and four for the Royal Indian Navy.

These sixty corvettes were constructed in eight Australian yards, in the largest single shipbuilding program in the history of the country. On average, one new corvette was being commissioned every twenty-six days.

During the war an estimated 15,000 young Australians served on them, and afterwards thousands of others gained naval experience or studied aboard the training corvettes. Apart for the four for the Royal Indian Navy, all the corvettes were named after Australian regional towns, an ideal connection for a young country seeking its own identity. The namesake towns followed the fortunes of, and helped with fundraising for, ‘their’ vessels.

From 'HMAS Castlemaine: the Corvette That Came Home', © 2021, Maritime Trust of Australia Inc.

Who was this bloke?

He could hardly wait to get into the Navy when war broke out.

He was so impatient to get to sea that his short training seemed a waste of time.

He was not dismayed to find that the ship he was drafted to, a corvette, was the smallest warship on the high seas.

He did not worry that the submarines his ship was designed to sink could surface and sink it by gunfire or torpedo it.

He was undaunted by the fact that any enemy warship would be bigger, faster and better armed and could sink his corvette with impunity.

He was not concerned that his ship was so slow and it’s anti-aircraft guns so inadequate that it was highly vulnerable to enemy planes.

He was not troubled by knowing his ship would sink like a stone if the hull was holed.

He was scared in action but did not show it.

He and the ship he learned to love answered every call made of them.

He quietly stowed his little world into his kit-bag when it was all over and went home largely unnoticed, because that is how he wanted it.

He is shy about wearing his medals because he reckons destroyer and cruiser blokes did more than he did.

He finds it hard to believe that the corvettes wrote an indelible page in Australian history.

He would be embarrassed to know he was one of the finest breed of men his country has ever known.

And who was this bloke?

The answer my friend is a CORVETTE SAILOR — known as a 'Corvetter.'


[From an unsigned document found in the Castlemaine archives.]

In 2022, the Maritime Trust of Australia was grateful to receive three documents that explore the Bathurst Class corvettes in more detail. We much appreciate the time and effort that went into creating the documents, and thank their respective authors for their contribution to maritime history, and for permission to present them here.

1. The Wartime Diary of William Hazeldene

'Bill' Hazeldene was born on 30 June 1900, at Wolverhampton in Britain. He served on two corvettes: HMAS Castlemaine from June 1942 to June 1943, and then HMAS Ararat from September 1943 to May 1944. He was an Engine Room Artificer: "competent in the workings of engines and boilers, and trained in the maintenance and operation and uses of all parts of marine engines. ERAs were the senior maintainers and operators of all warship mechanical plant." (Wikipedia).

The diary covers William Hazeldene's time on both ships and is especially interesting during the period Castlemaine was sailing to Timor and HMAS Armidale was lost. The diary was donated to HMAS Castlemaine by the Queenscliffe Maritime Museum, and scanned and transcribed by the ship's Archivist, Bob Pearson. Click example images below for large versions. 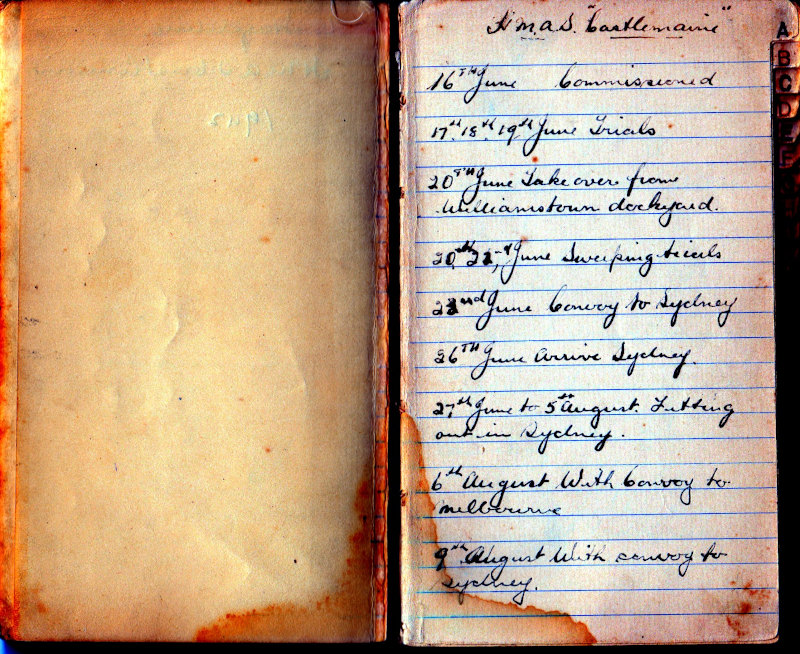 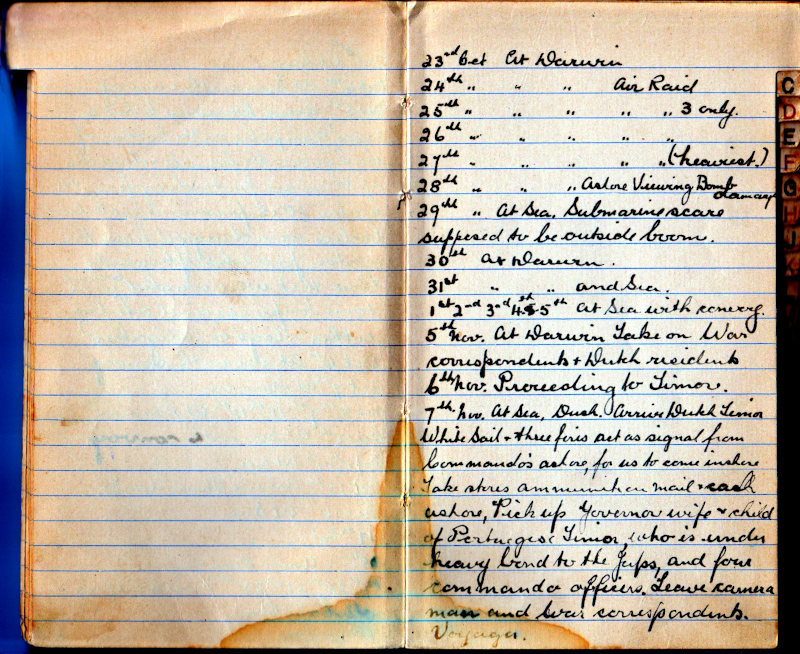 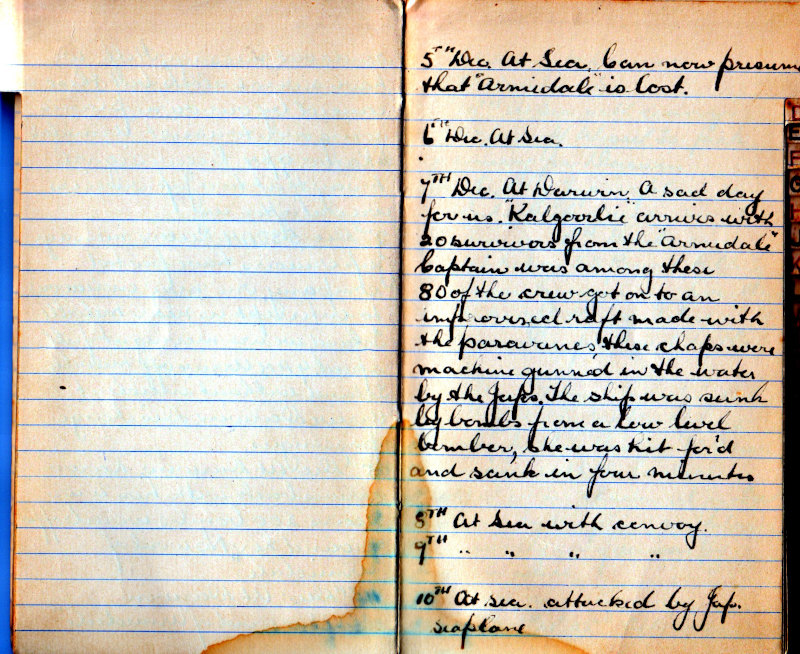 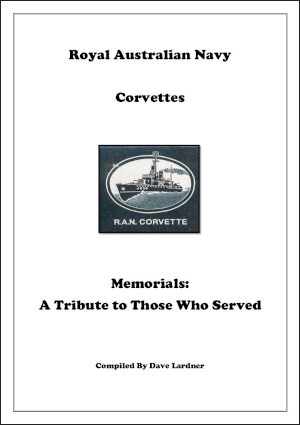 This is a compilation of the various corvette memorials found across Australia, a tribute to the sailors who served on them. It is is neither a history nor a chronology of these ships, but a pictorial collation of the various memorials that exist today, recognising the service performed by these ships and crews during the Second World War. Many of the memorials are in the towns of the ships they were named after. 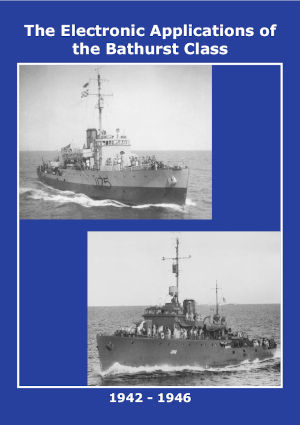 An overview of radar development within the RAN, with a focus on the Bathurst class corvettes. Australian radar evolved into a highly successful industry in the war years and by the end of 1942 was producing some of the best systems worldwide at that time. Most if not all electronic equipment fitted to the corvettes between 1942 and 1946 was of Australian design and manufacture. This report meshes fragmented or ambiguous documentation into a list of the electronic systems fitted to the Bathurst class vessels.