The armament fitted to HMAS Castlemaine was removed post World War II when she served as a training vessel. A replacement quick firing (QF) 4 inch gun, a Bofors anti-aircraft gun and an Oerlikon machine gun were refitted following conversion to a museum ship. None of these weapons were the actual pieces fitted when HMAS Castlemaine was in commission. A replica depth charge thrower has been mounted on the starboard side of the ship. Today, visitors can see all the armaments, and traverse and elevate the guns just as our servicemen did.

The corvettes were well armed for their size, with main armament consisting of either a 3 inch or 4 inch main gun, two depth charge racks which dropped the charges over the stern and two launchers which fired over the sides, multiple anti aircraft guns and a range of smaller machine guns. Originally a 20mm Oerlikon was mounted on the stern. In 1944 this was replaced by a 40mm Bofors which had greater range and fired a heavier round than the Oerlikon. Ammunition carried included 282 3 inch or 4 inch shells, 30 regular and 20 heavy duty depth charges and 2,500 rounds for each anti-aircraft gun. In addition to this, crewmen had access to standard issue 0.303 inch rifles and pistols. Corvettes were not fitted with torpedo tubes. 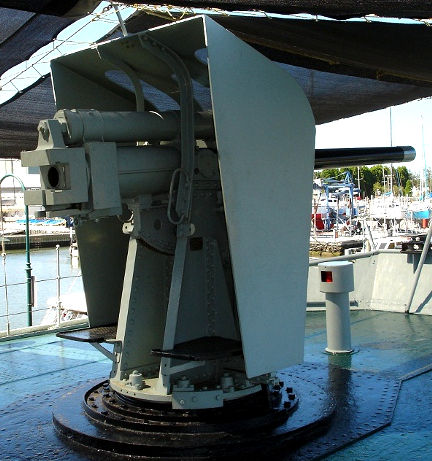 Deck gun
The armament mix allowed the corvettes to fulfil the intended purposes of escort and patrol vessel with ease, being able to engage enemy aircraft, light vessels such as submarines and other small ships and to provide close inshore support when landing troops.

HMAS Castlemaine's main armament was the 4inch gun mounted forward of her bridge. When completed, her 4 inch gun was BL.Mk.IX on a CP Mk.I mounting. The projectile and the propellant, which was contained in a consumable silk bag, were loaded separately. In 1943 the gun was replaced by a Mk.XIX 4 inch Q.F. gun on a CP Mk.XXIII mounting. The 4 inch gun was a quick-firing weapon, defined as one in which the propellant charge and the projectile were made up as a single unit. The current mounting was built in Bendigo Victoria, the gun, stamped M.A. L.A. M.T.C. Mk XXIII, had a range of 4-5 miles and fired a range of specialised shells. It has a rifled barrel for greater accuracy. It is not the actual weapon mounted on the ship during World War II.

The gun was operated by a five man crew consisting of two loaders, a breechman and gun trainer, all holding the gunnery rating and under the direction of a gunlayer of leading gunner rating. The gunlayer’s role, in addition to leading the team, was to adjust the elevation of the barrel as directed by the gunnery officer stationed on the bridge and fire whilst the trainer’s role was to traverse on to the target. Loaders selected shells and placed them in the open breech whilst the breechman’s job was to open and shut the breech, ensuring shells were primed and the gun was ready to fire. There was no director to control the firing centrally which meant the aiming was done by the gun crew.

Shells available were tailored to specific roles such as anti-ship, semi-armour piercing for anti-submarine work, fragmentation for anti-aircraft use and star shells which were used for illumination. The 4inch gun was not only more powerful than the 3 inch guns mounted on other Bathurst class ships but was preferred by crews as it gave a softer 'whoomp' sound when firing than the 3inch, which gave a sharper 'crack' and caused more strain on the ears. As with all armaments onboard, a stock of ready-to-use ammunition was kept on hand in nearby lockers with more being carried up from the magazine as needed. 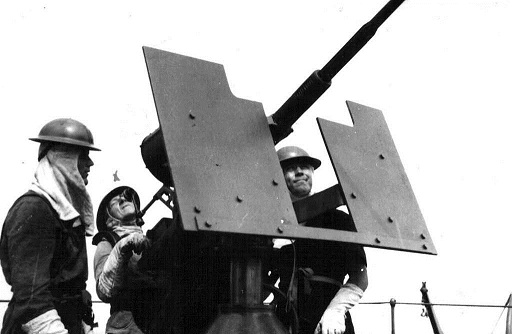 Original image of an Oerlikon gun and crew. Courtesy IWM

A Swiss designed single barrel 20mm Oerlikon light anti-aircraft gun was mounted on each side of the bridge, covering the bow, stern and side on which they were mounted and another single Oerlikon mount on the stern. The Oerlikon was the most prolific weapon fitted to ships in World War II. About 55,000 were fitted to Royal and Commonwealth Navy vessels.

Each mount was operated by a gunner with his shoulders tucked firmly into the supports to assist in manoeuvring it. The gun could be operated by two crewmen, a gunner and loader but an additional loader was usually allocated to each gun. The Oerlikon could fire 480 rounds per minute though this was rarely achieved under combat conditions owing largely to the need to reload. The black, side- mounted ammunition drum contained 60 rounds of ammunition. Five tracer rounds were evenly dispersed in the magazine drum to enable the gunner to see where his rounds were falling. Each single gun was mounted on a conical pedestal so that it could be trained in any direction and elevated up to eighty degrees. It had a maximum range of 6,000 yards (5480 m) but its accurate range was much less. 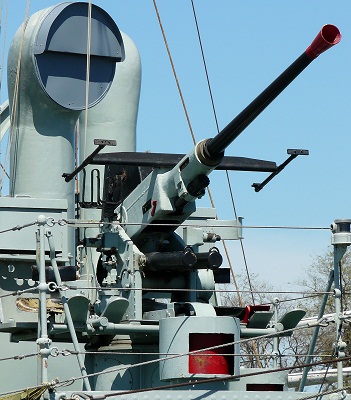 The fully restored Bofors. Visitors are welcome to practise aiming and traversing this venerable anti-aircraft gun

Mounted on the stern of HMAS Castlemaine is a single 40mm Swedish designed Bofors gun. The 40mm Bofors is credited with being the most effective anti-aircraft gun used I World War II. The mounting on HMAS Castlemaine is a QF 40mm Mark V which had a range of 9,700 yards (8,870 m) and could reach an altitude of 22,800ft (6,950m) at a rate of 160 rounds per minute. Under battle conditions a rate of fire of 100 rounds per minute would be difficult to achieve. A stern mounted Bofors replaced the single Oerlikon mounted in the same position in 1944.

The Bofor was operated by two gunners using hand cranks to aim the gun with multiple loaders constantly replenishing the four round clips. The gunner was seated on the left controlled elevation and fired by pressing a foot pedal whilst the man on the right traversed. When aiming, the gunners had to ‘aim off’, that is, account for the speed and direction of the aircraft being targeted. The sights were designed to accommodate a target speed of up to 300knots (555kph) to match the speed of aircraft of this period.

Despite the ship superstructure preventing the gun firing over the bow, the Bofors was best placed to defend the vessel as air attacks were most likely to come from behind. By approaching from the rear of the ship, aircraft could line themselves up with the direction of travel, meaning the ship was more likely to move into the path of fire and pilots could better judge its evasive actions. It also lowered the closing speed giving more time for the aircraft to complete the attack. 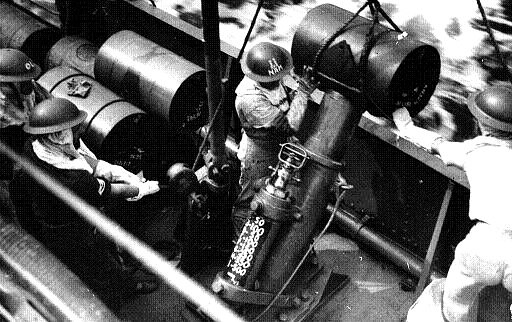 Depth charge launcher onboard HMAS Castlemaine, from the Argus newspaper

Since World War I, the depth charge had been the main means of attacking and destroying submarines. As an anti-submarine vessel HMAS Castlemaine mounted two stern racks and two throwers for launching depth charges, large steel drums containing explosives which detonated at preset depths by means of a pistol which could be set to operate at a specific hydrostatic pressure and therefore at a specific depth of water. The concussion damaged a submarine’s hull, causing it to either sink or be forced to the surface where it would either surrender or be engaged by the ship’s armament.

The simplest way to deploy a depth charge was to drop it over the stern. HMAS Castlemaine’s stern racks each held three depth charges. A depth charge thrower, which was capable to throwing a depth charge a short distance (60 yards/54 metres) from the side of the ship, was fitted on each beam. By using the racks and throwers together, the pattern of depth charges dropped from the ship would cover a greater area and thus improve the chances of a successful attack.