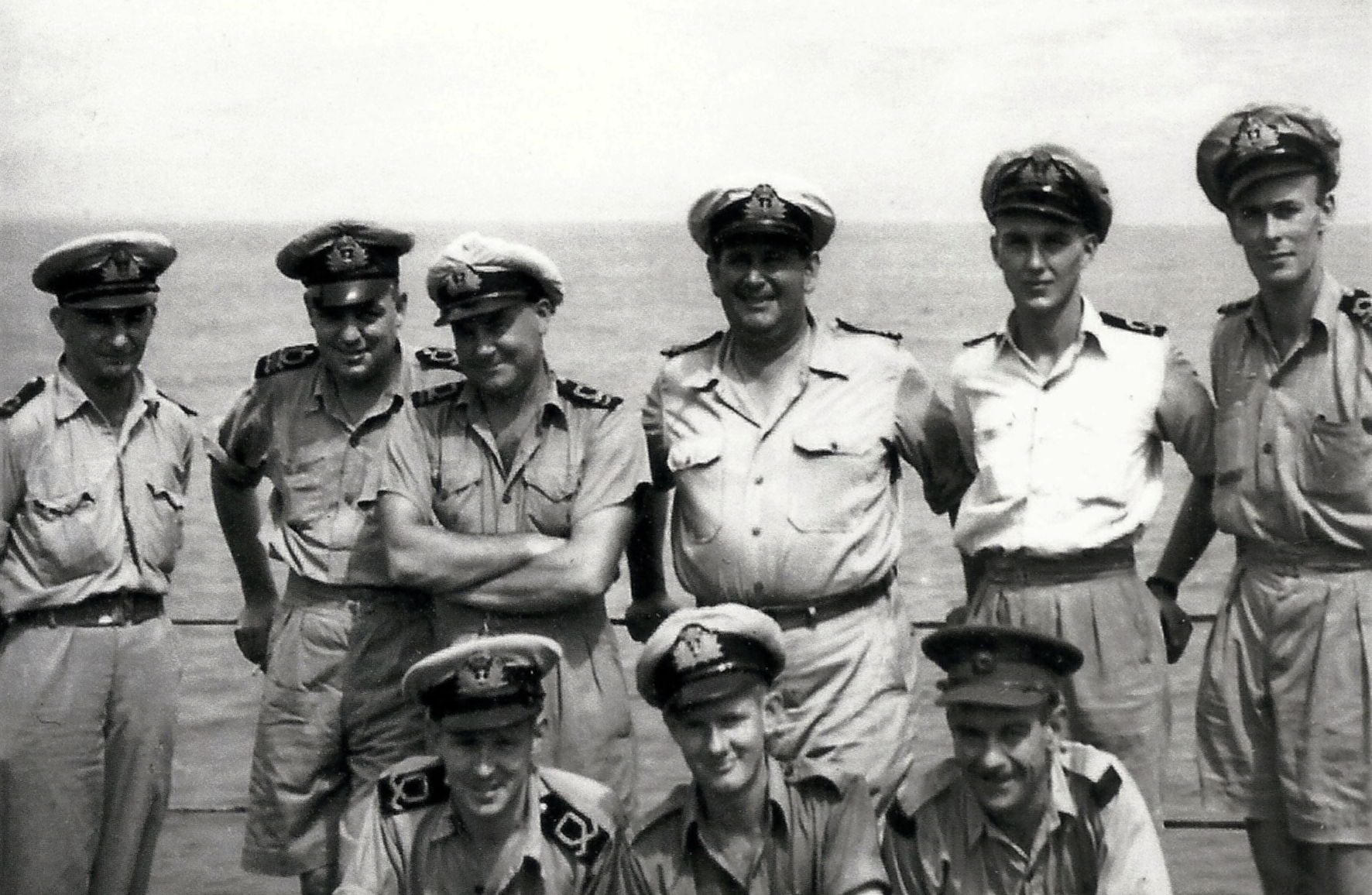 Lt. Commander Basil Paul (centre) and his commissioned officers onboard HMAS Castlemaine
Far from the stereotype of being aloof and removed from the actual work, the officers onboard a corvette were intimately involved with every aspect of running the ship. Owing to the small crew aboard the diminutive minesweepers, officers were required to work with the men, knowing and understanding each man and how to get the most out of him.

HMAS Castlemaine, as with the rest of her class, carried a standard complement of five officers—the Commanding Officer, First Lieutenant, Navigator, Engineer Officer and two Junior Officers. The officers were responsible for leading the ratings, making the major decisions onboard and ensuring they were carried out.

The commanding officer usually carried the rank of Lieutenant Commander and was responsible for overall safe operation of the ship, and the safety and welfare of all personnel. According to King's Regulations and Admiralty Instructions he was responsible for the quartering of all officers and the crew at their action stations, and make sure the armament was ready for use. At sea he was at all times to keep the ship in readiness for war. 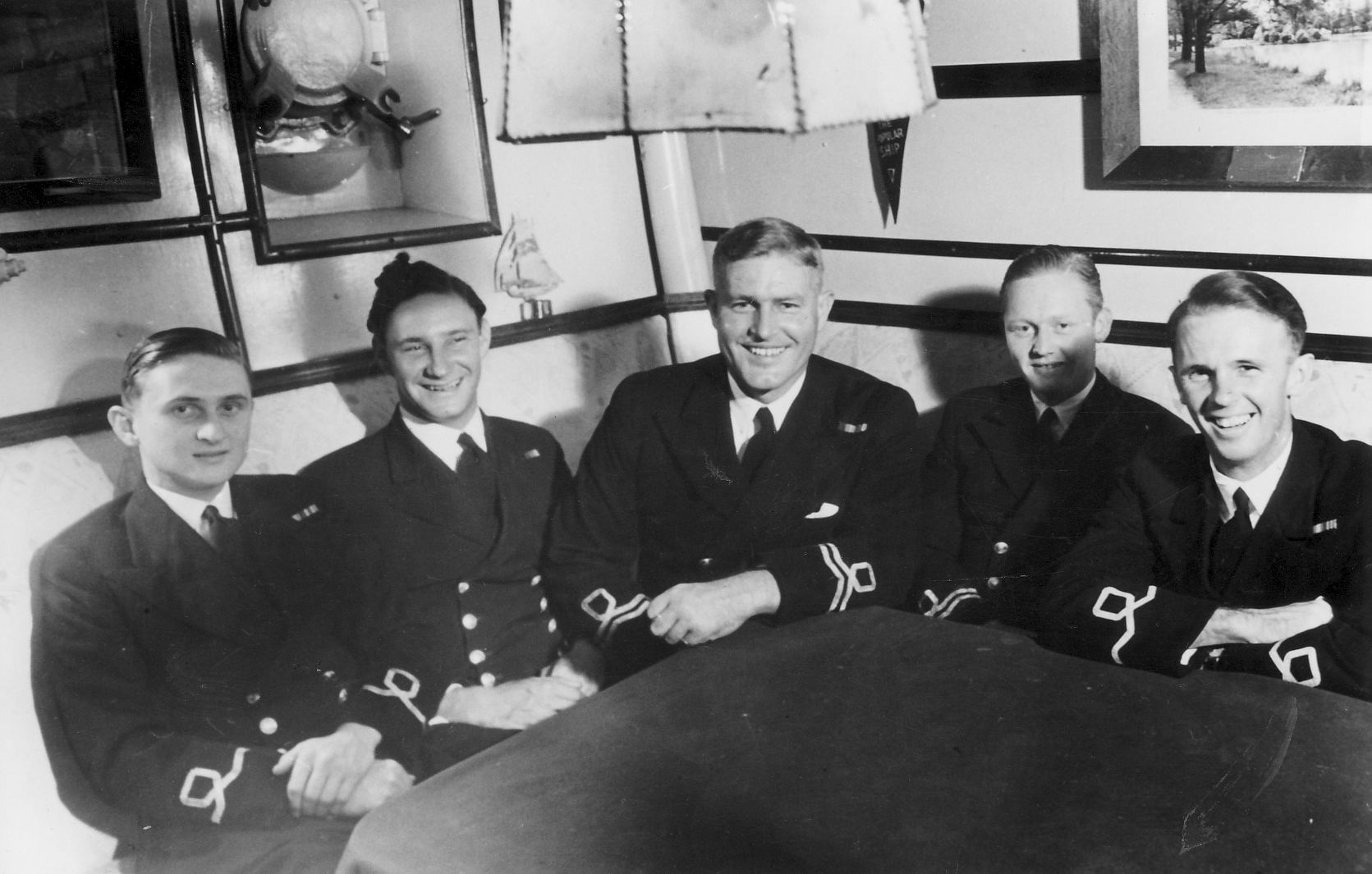 Officers in the wardroom, where they took their meals and rested between watches

The other officers had their quarters directly aft of the engine room with cabin accommodation and a communal wardroom. The commanding officer only dined in the wardroom upon the invitation of the other officers.

The four junior officers consisted of three seaman specialist officers and an engineering officer. The First Lieutenant was the most senior of the seaman officers and was responsible for overall ship cleanliness, administration and discipline within the ship, including the victualling and galley operations. He was the second in command, taking over the commanding officer's duties if that officer was incapacitated.

The main duty of a junior seaman officer was to keep watch, in charge of the ship for a period of four hours, once he had enough experience to earn his watch keeping certificate. When in dock each junior officer would take turns as watch officer, manning and controlling passage over the gangway. 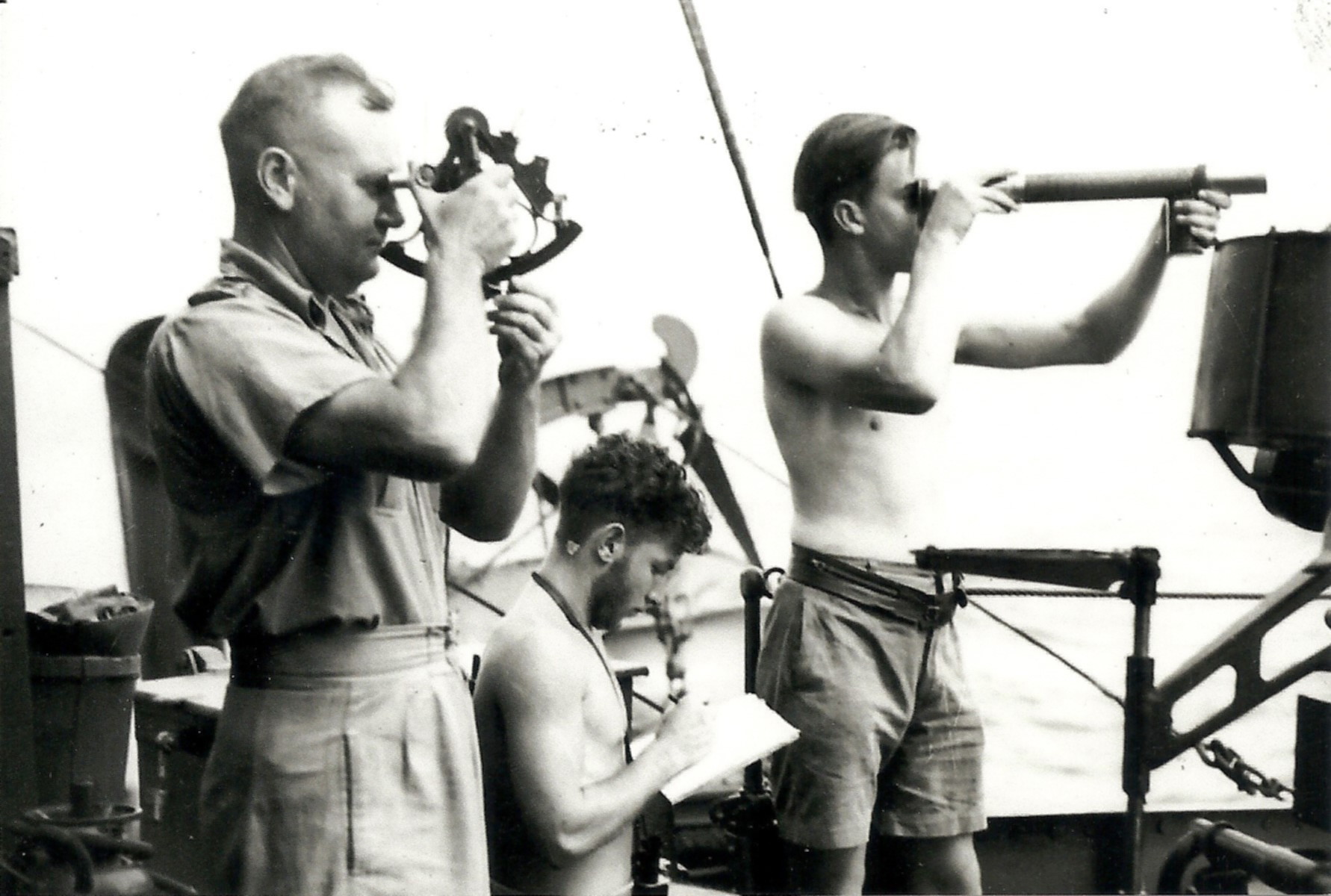 One junior seaman officer was chosen as the ship's navigation officer. The navigator was responsible for the charts and compasses and for setting courses. He kept a bridge keeping watch in rotation with the other junior seaman officers. During the 0400-0800 watch the navigation officer would be on deck to take 'star shots' measuring the position of stars in relation to the ship and horizon as it became visible to ascertain the exact location of the ship.

The navigator took sun sightings at noon to confirm the longitude of the ships' position. The navigation officer's other major role was to confirm and amend the charts noting the locations of minefields, reefs and other geological features. Such amendments were reported across the fleet, meaning that constant changes to charts were being made.

The other junior seaman officer was the communications officer, who was responsible for all signal traffic in and out of the ship and maintaining all confidential and secret documentation. He was also the gunnery officer and this included supervising minesweeping and ASDIC operations.

The engineer officer, usually a lieutenant, was responsible for the operation of all the machinery, including the boilers and main engines, electrical generators, desalination unit, refrigeration and the anchor and minesweeping winches. He was also responsible for the ship's hull and upper deck maintenance, fuel and water state in the tanks and the welfare of the engineering department sailors. His key role in action was as damage control officer overseeing all ship machinery and hull damage repairs, including stability, flooding control, and fire fighting.

Upon beginning their naval career, prospective officers undertook training at Flinders Naval Depot, Westernport Victoria. The quarters for new officers were segregated from those undertaking training as midshipman. Whereas 17 year-olds could undertake training as ordinary seamen, officer training was reserved for those aged 18 and older. The training was brief but intense, covering basic skills in navigation, gunnery and torpedo operations, and fire control. Other subjects included familiarisation with The King's Regulations and Admiralty Instructions, rifle and foot drill, the art of command and physical fitness training. Not all officer cadets passed; should a class member fail in any component he would not be on parade the next day, having been sent back to seaman training, typically without any parting words or ceremony.

Keith Williams, a retired second lieutenant who served in the corvette HMAS Lismore, said, "We were all immeasurably proud. Being an officer was all about understanding and working with people. Training didn't teach you that, you had to learn it. Just like today's university graduates quickly find, all training did was give you the knowledge you needed to learn your job properly."

The new officers found they relied upon those 'old salts' amongst the crew, particularly the petty officers, who knew naval life and work intimately to guide them through the smooth running of the ship, and offer those ingenious solutions to difficult problems which were not covered in basic training.