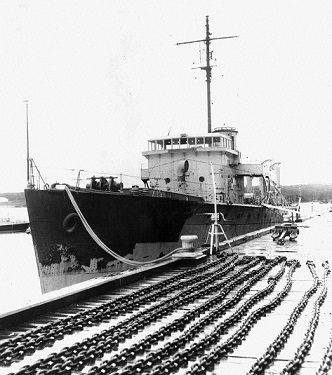 After WWII, along with other corvettes and 'River' class frigates, HMAS Castlemaine became part of the Reserve Fleet (mothball fleet) kept at Geelong. She was regularly towed to Williamstown Dockyard for dry-docking and maintenance, and returned to Geelong.

In 1955 the ship was allocated to Flinders Naval Depot (HMAS Cerberus) for use as a stationary training ship for engine-room artificers and shipwrights.

To prepare for this role she was towed to Williamstown dockyard for a complete engine overhaul. All non-essential equipment, such as guns, radar, radio, asdic, boats, minesweeping gear and deck fittings were removed. The crew's mess was gutted in preparation for the engine room artificer’s instruction place and work areas.

A steaming crew joined the ship for the voyage to the wharf beside the Seamanship School at HMAS Cerberus that was to become her home for the next 15 years. After arriving at her new berth HMAS Castlemaine was moored to the wharf, the boilers were flashed and the engines and propellers turned slowly. The ship's decks were stripped bare and little rigging remained.

HMAS Castlemaine in 1975, shortly after her arrival in Williamstown. The masts behind the ship are of the yachts moored at the marina and the cranes are in the dockyard

The shipwrights flaked out the anchor cables on the wharf as part of their training. The former mess deck was turned into a workshop and the minesweeping store into a classroom for the recruits. The small arms magazine was turned into a damage control compartment, which was flooded with water through water-boxes that had various sized holes and splits in them. The damage control parties had to enter the compartment and plug the holes. As water poured in, smoke bombs were activated and lights extinguished.

With the building of a new engineering school at HMAS Cerberus, HMAS Castlemaine's role as a training ship was reduced, especially as training methods and new technology was introduced to the syllabus. Parts of the engines and boilers were removed to the classrooms as models. During 1967 a study was undertaken regarding the practicality of converting her to a tank cleaning vessel, similar to HMAS Colac. The project was abandoned, and Castlemaine remained at HMAS Cerberus, rusting away.

The Cerberus Trust had been established in 1970 by dedicated volunteers for the express purpose of preserving HMVS Cerberus, a pre-federation ship of the Victorian navy, and the group was also interested in acquiring and preserving a corvette.

In 1969, HMAS Castlemaine was declared available for disposal and seemed destined for the breaker’s yard. The ship was offered for 'Sale by Tender as Lies,' with tenders closing on the 24th June 1971. But the Cerberus Trust lobbied, and in October 1973 the Commonwealth Government gifted them HMAS Castlemaine, with the proviso that she be restored to her World War II configuration.

The Maritime Trust of Australia Inc. was established in 1974 to take responsibility for the restoration and preservation of the ship. By then Castlemaine was little more than a rusty and gutted hulk, stripped of all her deck fittings, winches and armaments. Inside was not much better; there were neither light fittings nor bridge equipment. Below decks, the engines and boilers were in pieces. The work to transfer the ship from HMAS Cerberus to Melbourne began in earnest. The ship had to be hammer tested and surveyed for the return to Melbourne and her role as an historic vessel.

A detailed inspection of the engines and boilers found it too costly for them to be readied for the ship to proceed under her own steam. Arrangements were then made for a tow. In February 1974, a party of volunteers arrived on the ship to prepare her for sea and the long tow back to Melbourne. The Melbourne Harbor Trust Commissioners offered the use of a berth at South Wharf just below Duke and Orr’s dry dock which is now the permanent berth of Polly Woodside. HMAS Castlemaine was towed from HMAS Cerberus to her new berth in June 1974. Once she was safely secured alongside cleaning and restoration began. The ship was opened to the public almost immediately. 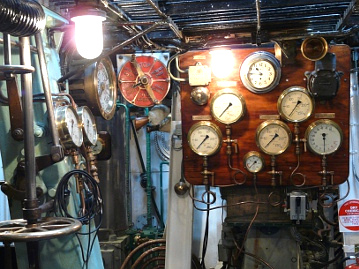 Negotiations began with the Victoria Government for a lease of the Duke & Orr site, but before this was completed it was announced that a new river crossing would be built downstream of Duke & Orr (the Charles Grimes bridge) and this would effectively land lock Castlemaine. The Maritime Trust then commenced negotiations with the Melbourne Harbor Trust to berth the ship at Gem Pier, Williamstown near the shipyard in which she was built. Those negotiations were successful and the vessel was moved to her new berth in September 1976.

In 1992 the ship was moved back to the Yarra River (No.15 North Wharf) whilst Gem Pier was rebuilt. On August 9, 1993, whilst at her temporary berth HMAS Castlemaine was struck and severely damaged by another ship attempting to berth nearby. HMAS Castlemaine returned to Gem Pier on March 1, 1994 after repairs were completed.

Since 1974, HMAS Castlemaine has been slowly restored to her 1945 configuration. The main mess deck has been turned into a museum area. The bridge, captain’s cabin, chart room and officer’s accommodation have been restored. The boiler and engine rooms have been overhauled. The engines are now in a working condition. The quarterdeck is fitted with minesweeping gear once again.

HMAS Castlemaine has the distinction of being the first warship preserved in Australia. She has now been joined by World War II veterans HMAS Diamantina in Queensland and HMAS Whyalla in South Australia. The National Maritime Museum at Sydney, New South Wales, has three post World War II warships on display.