The boiler and engine rooms are open to the public, with restoration work being completed in the early 1990s. For demonstration purposes the starboard main engine is now turned over using compressed air instead of steam and the port main engine is turned by way of an electric motor/gearbox and chain drive. Making the descent into the boiler and engine rooms is a highlight of the tour, as visitors can see and learn how the boilers and engines operated, surrounded by motion and the smell of oil.

At the heart of HMAS Castlemaine lies a pair of Yarrow Admiralty pattern, 3 drum boilers each fired by four sprayers. Each boiler has a steam drum and two water drums laid out in a vertical triangular configuration, with the steam drum at the top of the apex and the water drums at the base. Each water drum is connected to the steam drum by approximately 400 one and a half inch (40mm) diameter steel tubes. 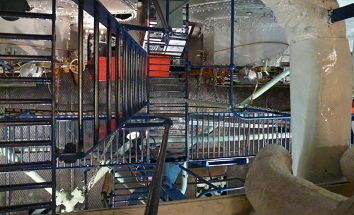 The descent into the boiler room

The boilers provided steam at 210 pounds per square inch (1450Kpa) to the engine room, to power the two triple expansion steam reciprocating engines. Steam from the boilers was also provided to the two electrical generators, various pumps, the anchor and minesweeping winches, an evaporator and the steering engine.

The boiler room was pressurised and accessed through inner and outer doors which provided an air lock. The boiler room was pressurised to maintain a positive pressure of 4-8 inch water gauge forcing more air into the boilers for combustion. If the air/fuel pressure ratio fell below this threshold there would not enough air feeding into the furnace compared to oil resulting in black smoke being made, potentially giving away the ship’s location to distant observers. Similarly, if there was too much air in proportion to oil, white smoke would be made. 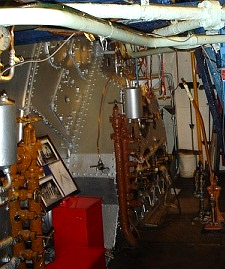 The restored starboard boiler
The air supply into the boiler room was maintained by controlling the steam supply to the small steam engine driving the rotary fan that pressurised the boiler room. Each fuel/air sprayer was manually controlled by the boiler room crew, which consisted of a stoker petty officer and two stokers. Whilst on duty, the crew maintained the boilers at operating pressure by keeping the supply air fan speed relative to the desired fuel supply to ensure a smokeless running, unless ordered to 'make smoke,' to produce a smoke haze and mask its position.

The steam system aboard HMAS Castlemaine recirculated spent steam, condensing it back into water for reuse in the boilers as well as running a desalinating unit (called an evaporator) located in the engine room which produced twenty-five tonnes of distilled water per day. 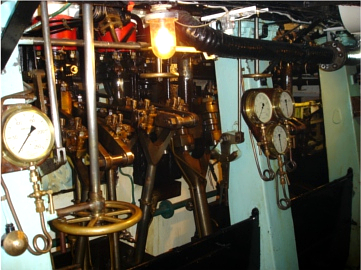 One of the fully restored engines which visitors can see turning over
Propulsion was provided by a pair of triple-expansion reciprocating steam engines, each developing 1,000 hp at 220rpm. Triple expansion engines are three-cyclinder reciprocating engines which circulate spent steam from the first cylinder to power the second and then third. Each engine was connected to a propeller shaft and gave HMAS Castlemaine a top speed of 15 knots (28 km/h) and an economical cruising speed of 10 knots (18.5 km/h). Both engines were built by Thompsons Engineering and Pipe Co. Ltd at Castlemaine, Victoria and delivered during the early stages of construction.

When under steam the engine room was manned by an engine room artificer (ERA), a leading stoker and a stoker. The ERA supervised the watch whilst the leading stoker carried out the instructions received from the bridge via the voice pipe or the telegraph. The stoker regularly oiled around the main and auxiliary engines and when the main engines were doing high revolutions, felt around the main bearings for over heating. Several times during the watch the stoker visited the tiller flat and oiled the steam steering engine there.