Sea mine designs evolved by World War II were simple and efficient with only slight variations. The mine itself consisted of a spherical, hollow steel shell containing air with the explosive charge, usually 600 lbs of TNT. By the later years of the war Amatol, Minol and other more powerful explosives were being deployed. Contact mines had a number of metal horns protruding from the casing, which when struck with sufficient force, such as a ship's hull, activated the firing mechanism. 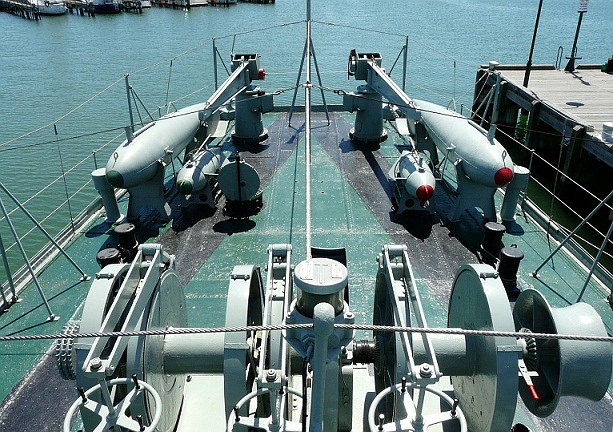 Minesweeping equipment on the stern of HMAS Castlemaine today

Most contact mines were moored to the sea bed with a length of wire attached to a heavy sinker so as to keep them at the desired depth, making them hard to observe and ensuring they would hole ships' hulls below the waterline causing maximum damage.

The main alternatives to the moored mines were the magnetic mine, acoustic mines and those fitted with a delayed action mechanism. The magnetic mine employed an electrical unit which picked up the magnetic field of a ship passing over close to it. When the field was strong enough the mine would explode. Acoustic mines were fitted with an external hydrophone and were triggered by the noise of the ship’s propellers or main engine reacting on a diaphragm in the mine. The sensor could be set to react to a particular type of vessel, such as large merchant vessels. 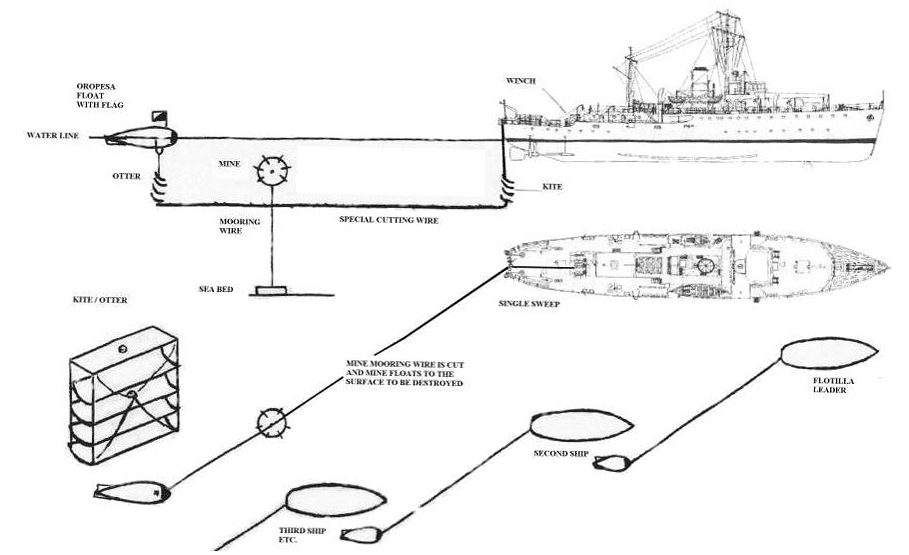 The minesweeping operation. The towed float, kite and otter stretch the cutting wire which cuts the moored mine loose. The bottom diagram shows a flotilla of ships sweeping in formation to protect the trailing ships from mines ahead.

The delayed action mine was tethered like the contact mine but the cable attaching the mine to the sinker remained short before unspooling at a preset time. This meant the mines so laid would remain on the seabed and thus be difficult to detect before floating up to the desired depth. Delayed mines were most commonly deployed where an enemy would expect mines to be laid, so that any operations to sweep an area suspected of being mined would not reveal their presence. Safe passage could not be guaranteed except straight after sweeping the area.

Owing to the mines' buoyancy, the method of mine-sweeping contact mines was to cut the mooring wires, so they floated to the surface where they could then be destroyed by small arms fire. To cut the wires, HMAS Castlemaine used an mk.1 Oropesa sweep which consisted of a single wire with a steel torpedo-shaped float attached to its outer end. Another wire was fitted with cutters angled across the direction of travel, and was kept at a suitable depth by a 'kite' and an 'otter.' These were made of flat steel with several blades at an angle. The only difference between them was the chain sling attachment. So the Oropesa float could be seen as it was being towed through the water, a vertical pole with a small flag was attached to its head. HMAS Castlemaine could operate her Oropesa float at speeds to 10 knots. 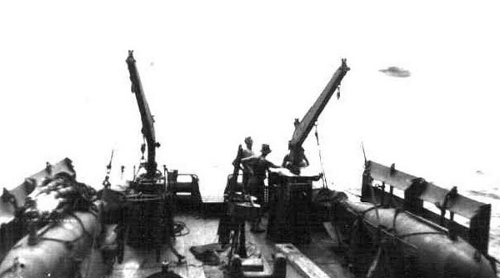 Minesweeping operations onboard HMAS Castlemaine during WW II, from the Argus newspaper

The most common method of using the Oropesa sweep was by having a number of minesweepers steaming in echelon, each vessel with its bow just inside the area swept by the ship immediately ahead. In theory, only the lead ship would be exposed to unswept water. The shallow draught of a minesweeper (8ft 6inches for HMAS Castlemaine) also afforded it some protection from contact mines which were usually moored a greater depths from the surface to catch deeper draught, fully laden merchant ships.

HMAS Castlemaine was also fitted to operate an L.L. sweep. This was the basic sweep against magnetic mines. It consisting of a pair of insulated and buoyant electrical cables towed astern of the minesweeper. By pulsing the power on and off, a changing magnetic field was created astern which fired the mines.

To protect HMAS Castlemaine from magnetic mines she was fitted with a number of degaussing cables placed inside the hull, just below the waterline. These produced an electro-magnetic field which reduced the ship’s magnetic footprint therefore reducing the risk of triggering magnetic mines in the vicinity of the ship. To power both the L.L. sweep and the degaussing system, the ship was equipped with a Gardiner six cylinder diesel engine generator, which was located in the engine room.

HMAS Castlemaine was fitted to operate a SA type C sweep oscillator type audio-frequency for acoustic mines. This device consisted of one or two Fessenden oscillators fitted inside the stem, in a flooded forepeak. The diaphragm of the oscillator was of 36 inches diameter and produced a beating sound similar to that of a hammer. The underwater noise set off acoustic mines at a safe distance from the ship.